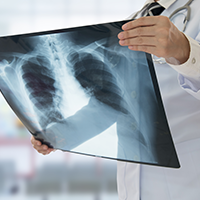 XRay - AP & LAT MANDIBLE What are X-rays? X-rays are electro-magnetic radiations that are produced by special machines called X-ray machines. These cannot be seen, felt or heard. How do X-rays work? Chest X-rayDifferent parts of the body behave differently with X-rays. While scanning chest X-ray , structures such as bone absorb X-rays, whereas air in the lungs lets all X-rays pass through. Thus, when X-rays pass through the body, when they come out, they have different strengths, depending on what parts of the body they have passed through. When these X-rays hit a film (like a photographic film), that film gets exposed depending upon this variation. Like a photographic film, this special film also needs to be developed, before we can see the final picture. Where are X-rays useful? X-rays have been used to view all parts of the body. Specifically, they are required for chest, all bones, joints and abdomen. Are there any dangers? Since X-rays involve radiation, there is a theoretical risk, though none in practice. In women who are pregnant, X-rays should be performed only after weighing all the risks. What are the dyes used with X-rays? X-RaysSometimes, artificial dyes are used to improve our ability to see internal structures. The common dyes used are either barium containing (barium sulphate) or iodine dyes. Barium sulphate is used for all barium examinations to study the stomach and intestines. Iodine dyes are usually injected in the veins to study the kidneys or during angiography, etc. Are there any complications of the dye? Five percent of the patients may get nausea and redness of skin. Though severe reactions are known, these are very rare and uncommon. However, in patients who have a previous history of allergy, asthmatics, those with renal and cardiac failure, a special dye is used which is more expensive but safer.

The mandible is the single midline bone of the lower jaw. It consists of a curved, horizontal portion, the body, and two perpendicular portions, the rami, which unite with the ends of the body nearly at right angles (angle of the jaw). It articulates with both temporal bones at the mandibular fossa at the temporomandibular joints (TMJ).X-ray of this region is generally done to identify fractures in the area.

An X-ray (been used for decades) is an imaging test that uses small amounts of radiation to produce pictures of the organs, tissues and bones of the body. It can help your doctor view the inside of your body without having to make an incision. X-ray mandible is the single midline bone of the lower jaw. It consists of a curved, horizontal portion, the body, and two perpendicular portions, the rami, which unite with the ends of the body nearly at right angles (angle of the jaw).This can help them diagnose, monitor and treat many medical conditions. Different types of X-rays are used for different purposes. An X-ray can help find the causes of common signs and symptoms such as pain, tenderness, swelling or deformity of the knee. It can also detect broken bones, dislocated joint or arthritis in the joint. After a broken bone has been set, the image can help determine whether the bone is in proper alignment and whether it has healed properly. Different parts of the body behave differently with X-rays. X-rays work because the body's tissues vary in density (thickness). Each type of tissue allows a different amount of radiation to pass through and expose the X-ray-sensitive film. For example, bones are very dense and most of the radiation is prevented from passing through to the film. As a result, bones appear white on an X-ray. Tissues that are less dense such as the lungs are filled with air and allow more of the X-rays to pass through to the film and appear on the image in shades of gray. There are some risks involved in getting an X-ray. But for most people, the potential benefits outweigh the risks.